The Powerhouse
A worldwide race is on to perfect the next engine of economic growth, the advanced lithium-ion battery. It will power the electric car, relieve global warming, and catapult the winner into a new era of economic and political mastery. Can the United States win?
Written by: Steve Levine
ISBN: 9780143128328
The Powerhouse 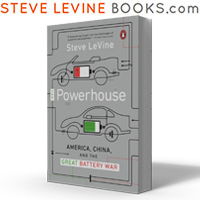 Description: A worldwide race is on to perfect the next engine of economic growth, the advanced lithium-ion battery. It will power the electric car, relieve global warming, and catapult the winner into a new era of economic and political mastery. Can the United States win?

“LeVine is a masterful story teller and The Powerhouse is a thrilling read about an innovator’s quest to transform our planet and our lives. His goal, a revolutionary battery, has the potential to change everything.”

—Peter H. Diamandis, chairman of the X-Prize Foundation and
author of Abundance: The Future is Better Than You Think

“Gripping and mind-opening. Filled with astonishing research, The Powerhouse reads like a thriller. It’s fabulous.”

—Amy Chua, Yale Law professor and author of Battle Hymn of the
Tiger Mother and The Triple Package

“Steve LeVine has written a fast-paced, engaging account of one of this young century’s great quests: the search for a technology that will unleash a dramatic transformation of the world with blockbuster new industries and culture-changing products. It’s an amazing story, gripping in its surprising narrative and crowded with fascinating characters.”

Praise for The Powerhouse

Remote, forbidding, and volatile, the Caspian Sea long tantalized the world with its vast oil reserves. But outsiders, blocked by the closed Soviet system, couldn’t get to it. Then the Soviet Union collapsed, and a wholesale rush into the region erupted. Along with oilmen, representatives of the world’s leading nations flocked to the Caspian for a share of the thirty billion barrels of proven oil reserves at stake, and a tense geopolitical struggle began. The main players were Moscow and Washington–the former seeking to retain control of its satellite states, and the latter intent on dislodging Russia to the benefit of the West.

“No one knows the murky world of American politics, international oil and corporate corruption in the Caspian better than Steve LeVine.

In Putin’s Labyrinth, acclaimed journalist Steve LeVine, who lived in and reported from the former Soviet Union for more than a decade, provides a gripping account of modern Russia. President Dmitri Medvedev and the country’s real power, Prime Minister Vladimir Putin, are posing a resolute challenge to the West. In a penetrating narrative that recounts the lives and deaths of six Russians, LeVine portrays the growth of a “culture of death”—from targeted assassinations of the state’s enemies to the Kremlin’s indifference when innocent hostages are slaughtered.

“If Steve LeVine's aim … was to chill us to the marrow about post-Communist Russia, he has succeeded.”